Devizes Railway Station
A branch line to Devizes was authorised in 1845 and then sold to the GWR in 1850.  As a branch line it served Devizes well until the controversial Beeching cuts, overseen by Transport Minister Ernest Marples (Construction Company Marples Ridgeway, built the M1 Motorway during the same period). Along with 4000 miles of "underused" rail networks Devizes Branch line was closed in 1966, the track and bridges removed and some of the land developed for other uses.  Almost ever since then there has been a constant demand to provide Devizes with a rail link. 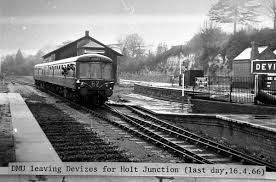 Why does Devizes need a rail station?
The Devizes area with a population of around 31,000 is the largest town in Wiltshire not to be serviced by rail. Influential employers within Wiltshire have said that having a railway station would significantly help them to both conduct business and attract new talent.  It would also help local students access courses at universities and colleges in Bristol, Bath, Reading and Newbury.  Devizes is an area surrounded by both beautiful scenery and historic sites. A railway station would help boost connectivity, enhance tourism, and reduce the impact on roads.

Why is the DDP conducting a consultation?
To build up a business case for a new development the government and rail service providers need to establish whether providing a new service is value for money and that that potential passenger numbers will justify the investment.

The feasibility of several potential sites will be formally considered as part of the Strategic Outline Business Case process.

What sites are being looked at?

Several sites are being looked at: however, early assessment suggests that there are merits and challenges with several of them. 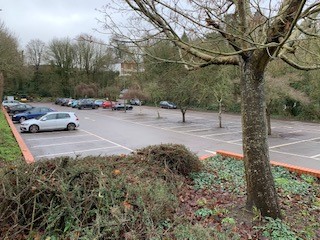 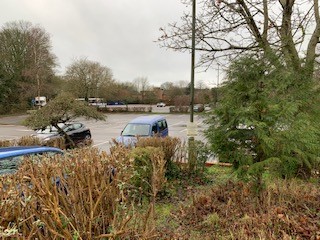 We have looked at the possibilities of re-establishing a station in Devizes itself, economically this is out of the question as too many houses would need to be demolished, track re-laid and bridges rebuilt. The rail line itself came in through Pans Lane where there was a Halt.  The remains of the route can still be seen if you stand on the road bridge.  All the houses along the route between Mill Close and Pans Lane would have to be demolished.  The gardens at the back of The Breach would have to go.  A crossing would have to be installed across the A360 about where Hillworth Road is. The occupants of the Tunnel would have to be evicted and major works on the tunnel itself would need to be undertaken.  At the other end of Station Road Car Park is Moyne Close with Elisabeth House all of which would need to be demolished, along with several properties in Avon Road.  Bridges would need to be reinstated along with the "Fish Bridge" which spanned the now much widened A361 between Marsh Lane (to Rowde) and Devizes Road (to Poulshot).  And that is just the bit that goes through Devizes. So realistically, although a nice idea, it is not a viable proposition. 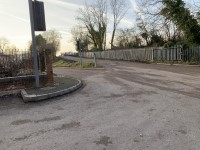 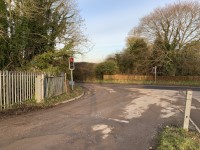 These two shots show the entrance to and exit from the station.  The Waiting Room was where the big tree is now on the other side of the road. 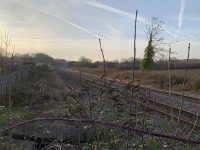 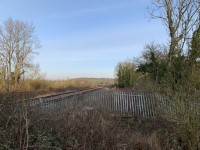 The site of the old Market Lavington Station is in private hands. This was never a good station even in its heyday.  The station, built on a raised embankment, was split with the Station on one side of the road and the Waiting Room on the other. Well established trees would need to be cutdown and the access onto the A360 may be considered too dangerous. 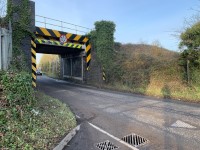 Reinstatement here is considered economically challenging. It is also further from Devizes than the alternative site, just outside Lydeway, and no possibility of a segregated safe cycle route. 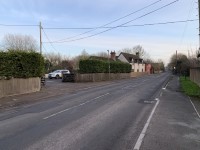 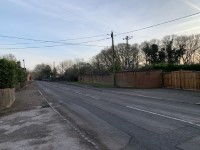 Views of the approach to the Clock Inn, where there is a narrow road bridge over the railwayline. 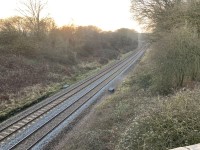 The Clock Inn, where the narrow road bridge crosses the railway line, at Lydeway was also looked at, but the track is down a 10 metre embankment, on a bend and on a gradient.  There are also a considerable number of dwellings close to the track on both sides of the road which might have to be demolished. So not suitable either, you cannot start a train on a gradient!

However, there is a site about a mile upline (towards London) at the point where the old branch line left the main line, which goes from London Paddington to Westbury and Penzance via Exeter.  The ground here is level and  could accommodate a station.

There is an existing rail service between Reading and Westbury.  There are about 30 train services a day between about 06:00 & 21:58.  The suggestion it that this service will stop at Devizes Gateway thus providing a link to high speed mainline rail services to the rest of the network.

Car travel is cheaper than rail.
Yes, it is at the moment, but most comparisons do not take into account the cost of the vehicle, depreciation, car tax, insurance, maintenance and parking. Rail travel is less damaging to the environment than car travel.  Not everyone has access to a car. Tourists often travel by public transport. Many business users prefer to travel by rail as they can work on the train.

How will people get to the rail station?
There is a significant number of people who do not have access to a car or would prefer to travel by public transport. We intend to provide an electric shuttle bus to connect with the station from Devizes.  Existing bus services could also be utilised. By upgrading parts of the old rail track we hope to create a cycle path to the station. Taxi facilities and car parking will be provided, possibly with EV Charge Points. Another aspiration is to provide “autonomous” electric “pod“ vehicles.

Will it reduce car traffic?
No, not necessarily.  The origin and destination of travellers will still be Devizes.  However, it will reduce vehicle movements outside the area between other towns, and if the proposed electric shuttle bus is used then some car journeys will also be cut.  We will be taking into consideration what is known as “end-to-end travel experience”, that is to say the whole journey from start to finish. If this scheme can contribute to reducing the dependency on private vehicle usage then the overall impact on the environment could be significant.

Devizes needs a bypass.
Traffic surveys conducted over several years suggest that it would not be justified or needed.  80% of the traffic the origin and destination of the vehicle movement is Devizes.  Of this about 20% is people driving around the town looking for a vacant “free” (as in not paid for) on street parking space.  Only 20% of the traffic actually goes through the town.  This has been determined by several ANPR based metro count studies over several years.  Most commercial traffic uses the A4, A350 or the A338.
The uncomfortable truth is that we as car users are the problem.